A Tucson native, Neil attended the University of Colorado at Colorado Springs, where he earned a B.A. in Geography and Environmental Studies with a minor in Energy Sciences in 2010. It was in Colorado that Neil developed a love for mountain biking and hiking, as well as the trails that make these activities possible. In less than three years, he had been to the top of every mountain above 14,000 feet in Colorado. Interested in giving back to the trails he spent so much time on, Neil joined volunteer trail work efforts. It was at an Arizona Trail work event that Neil met Mark Flint, who connected him with work at the National Park Service and The Town of Marana Parks & Recreation.
Neil spent time at both Coronado and Chiricahua National Monuments performing trail maintenance. Between 2011 and 207 he worked as a
trail crew leader for Marana Parks & Recreation. In 2017, he moved to Pima County Natural Resources, Parks & Recreation, where he works as a trails program manager. Neil has experience both in designing a trail corridor and detailed layout work, marking precisely where a new trail will go. He has accumulated thousands of hours on trails not just for work, but also for play as an avid mountain biker, trail runner and backpacker. This has translated to a lot of time spent observing and assessing how different trails hold up to use and erosion, as well as the opportunity to listen to opinions from a variety of trail users. Neil has developed an understanding of what terrain will support a sustainable trail design, and what trail layout will be enjoyable for all user groups.

In 2015, Neil became a member and part-owner of Southwest Trail Solutions.

We Do That! In fact, it's our specialty.

Learn more in the Community, HOA & Neighborhood Trails Section under the Projects dropdown. 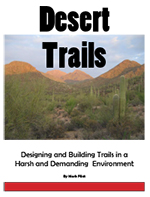